When an individual is arrested, they will either have to post bail or wait in custody until the trial date. Trials are often set weeks or months from the date of arrest and should not be confused with first appearance. Bail is a set amount of money that acts as insurance between the court and defendant

If a defendant skips bail and doesn’t appear at a court date, the bail will be surrendered. In the event that a defendant’s bail is paid through a bail bondsman, the bail bond agent has the authority to locate the defendant and surrender him or her to the court. 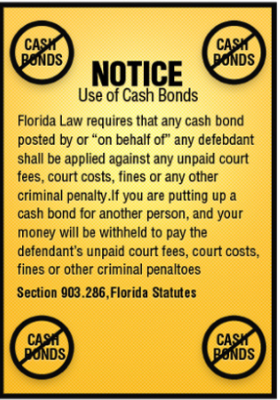 First appearance is a defendant’s first appearance in front of a judge. Florida law mandates that when an accused person is taken to jail, they appear before a judge within 24 hours of arrest. At this appearance the judge will review the case and address the matter of the defendant’s bond.

Any of the following events may happen at first appearance: